March 16, 2010
Donna Simpson, a 42 year old obese mom wants to grab the title of 'world's fattest woman'. She eats huge piles of junk foods everyday, and she is gaining more weight very fast. She doesn't move too much, she eats

about 12000 calories every day which are just making this woman fat everyday. She is now pretty determine to become fattest woman on the planet.

She already have world record for 'World Fattest Mother' and now she wants more, she told the Daily Mail newspaper. Currently her weight is 273kg. The target weight that she wants to reach is 450kg.

Now you wouldn't believe that 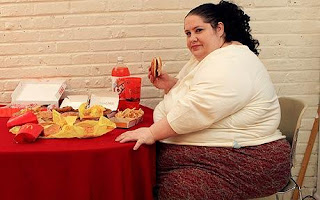 she has this website where she broadcast her junk dining from live cam, and men pay money to see her eating, reported by the Daily Mail. All this is because she has to fund massive $750 weekly shopping in grocery stores to get more foods. Her partner, Philippe, is also supporting her desire to reach the goal to become Worlds Fattest Woman.

Is she giving an perfect example as a good mom who says gaining weight is a healthy and nice? ? She has a 3 year old daughter.
Funny News World News