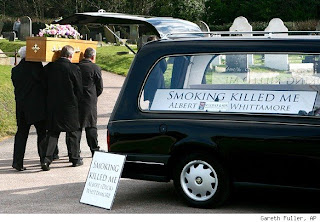 This is a story of Albert "Dick" Whittamore who died in January. His dead body was put into a coffin box with an unusual message for the world to see. He suffered from lung disease 'emphysema'.He died at the age of 85. He wanted to put a sign reading 'Smoking Killed Me' in the window inside his hearse and also in his coffin box after his death. Then it passed around his home town of Dover, Kent. The News was circulated all over UK and to rest of the world.
Funny News