March 20, 2010
Demi Moore saw this disturbing message in her Twitter which said that a man from Florida was going to kill himself. The man said he was going to hang himself. Later Demi Moore tweeted "R U rlly asking 4 help?" 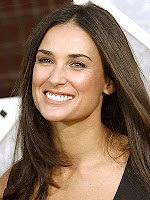 Nia Vardalos, My Big Fat Greek Wedding, also got disturbed by the man's suicide threat in Twitter and later she called officals about the threat. The police went to unnamed house and took the man to hospital.

She thanked twitter and said "Thank you twitterverse for your help supporting someone in pain last night," in her tweets.