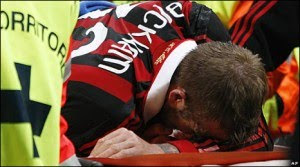 The 2010 world cup will not be seeing the magical moment from star football player, David Beckham, due to torn Achilles tendon injury. The dream of playing fourth world cup has been shattered away into pieces and now England will face major loss due to David Beckham Injury, as he was stretchered away for medical attention.

David Beckham is now flying to Finland for surgery during when the World Cup 2010 will start. So no more magical moment of this superstar will be seen in this world cup.

http://www.ehow.com/members/stevemar2-articles.html said…
I hope Beckham makes a full recovery from his injury soon. His absence from the 2010 World Cup will be a devastating blow to England. Prior to the injury, I didn’t think the USA would be able to beat England in group play, but I’m starting to reconsider my opinion.
March 15, 2010 at 12:48 PM