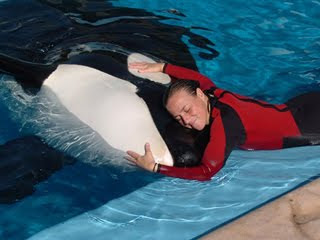 Woman trainer got killed by a serial killer whale at the Shamu Stadium.
(Photo from Taken in 2005)

February 24, 2010
At Sea World in Florida, Dawn Brancheau, the Whale trainer, was dragged inside the water in front of many spectators and was killed. A 12,00 pound Whale grabbed her inside the pool when the veteran trainer was exhibiting the show to spectators at the Shamu stadium in Orlando, Florida on Wednesday. An eyewitness said that she was grabbed very fast in her upper arm. The attack was very violent, her shoes flew when the whale took her down.

A normal show was going on with around 40-50 audiences when suddenly Tilikum, the Whale, grabbed Brancheau and pulled her in. At first many thought it was a part of the play, but things started to look suspicious when the whale started to swimming around her. Immediately the alarm was heard in the moment of despair. The audiences were moved out from the stadium while other workers tried to get her out. Another two eye witness who were underwater viewing the area said they saw a big killer whale grabbing a woman in its mouth. Everyone is stunned with the incident.

However, the whale was not responding as good as before on that particular day. But the most important and shocking news was Tilikum was responsible for two tragic deaths before that unfortunate event. It is quite unusual for the park administration how such serial killer whale was allowed to perform.

Dawn Brancheau had 16 years of experience with many whale even with one 30-year-old whale. She was a leading trainer in the park.