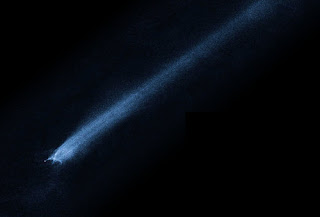 It's not a Star, nor a Galaxy, not even a Meteor or Asteroid, says scientists from NASA. They have never seen anything like this before. So what is it?

The speed of this thing is 10,000 mph. They even named this sucker -P/2010-A2, and it was discovered back in January y NASA's Hubble Telescope.

Now guys from NASA says that since they have never ever seen like this before they predicted that it is a collision of two Asteroids. As it has strange 'x' shape, many people believe it might something that we have never imagined, or heard of before.
Science Fiction guys probably are working on to make a breakthrough point of view to describe the object in the sky.
I just wonder if NASA always published such reports on mysterious phenomenon in far universe, or maybe they know what that mysterious object spotted in space.