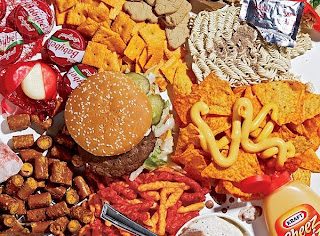 Junk foods can be addicted as drugs, says researchers from the Scripps Research institute in Florida. They have discovered that junk foods which are high in calories can be extremely addictive like drugs. This is called junk food addiction.

Junk foods like Pizzas, Hamburgers, Fries, Doughnuts and others are just enough to make you like a drug addict but for foods.

Generally in obese people, such addiction is seen in high level, because most of the time obese people gets nervous when they are starving. But not only them, even lean thin people can be seriously addicted to junk foods.

An experiment was held on three groups of lab rats. For the first group of rats, they were given regular diet of healthy foods. The second group of rats were given given limited amount junk foods. The third groups were given foods with high calories like cookies, donut and meats.

The results were as follows:
The first groups didn't show much change. Same thing happened to those rats who were fed with junk foods. The third groups gained weight.
Then the scientists made another experiment with those rats by using electrical stimulations. They found the second groups show that they needed more food to feel good than other groups of rats. In conclusion it showed that same thing happens to human being.

"This is the most complete evidence to date that suggests obesity and drug addiction have common neurobiological underpinnings," said study coauthor Paul Johnson.

Moreover it was seen that drug addiction and junk foods have similar level of creating an addiction on people.
Other report showed that in some adults who claimed they can not live without sugar said they would become depress if they didn't take sweets. Sweets can alleviate stress. Adults and even children takes sweets when they need to feel good, and this goes on and on. This is Junk Food Addiction